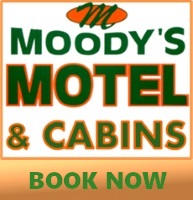 You are here: Home

We have continued to be a Moody family tradition since our beginning in 1927. Moody’s founders, Percy and Bertha Moody, started it all when they opened three small cabins on the top of the hill, charging $1 a night. They then opened a small Tea Room (now known as Aunt Letta’s House) to serve dinner to their guests and those traveling up and down Maine’s coast. The following year a lunch wagon was opened and later moved down the hill when Route 1 was re-routed in 1934. That same lunch wagon was expanded many, many times to become the Diner that we now know today.

The Diner is still owned and operated by the children, grandchildren, and great-grandchildren of Percy and Bertha. And, a good two dozen of them are still involved or employed at the Diner today. We hope that you will visit us soon and that it feels . . . like coming HOME!